Examination of the Processes of Grade 7 Students to Constructing The Area Formula of Quadrilateral: RBC+C Model

In this study, it is aimed to analyze the formation processes of 7th grade students in constructing area formulas in quadrilaterals according to the RBC+C model. In this study, case study, one of the qualitative research methods, was used. The study group of the research consists of 7th grade students in a public secondary school in the Central Anatolia region. While one of the two randomly selected classes was educated according to the teaching activities prepared according to the epistemic actions of the RBC+C model, the other class was taught according to the mathematics curriculum of the Ministry of National Education. Then, a total of 6 students, one from each with low, medium and high achievement levels, were selected from these two classes according to the maximum diversity sampling method. Semi-structured interviews were conducted with these students. As a data collection tool, two questions developed by the researcher to construction the area formula of the trapezoid and rhombus were used. The data obtained as a result of individual interviews with the students were analyzed using the RBC+C model. As a result of the study, the students in the classroom taught with the activities prepared according to the epistemic actions of the RBC+C model; It has been seen that the quadrilaterals pass to the level of creation by using the existing information structures in the process of constructing the area formula. It has also been observed that students with low achievement levels exhibit a self-confident attitude and try to explain their ideas using mathematical language. In line with these results, it is considered necessary and recommended to organize teaching activities that will allow students to learn meaningfully. 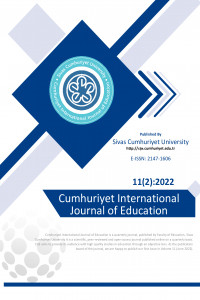