The aim of this study is to carry out the validity and reliability studies of critical thinking barriers (CTB) scale. The ideas of a sum of 19 experts were taken for 86 items, which were formed as a result of literature survey. The number of the items in the draft scale was reduced to 54 following the ideas of experts and it was implemented on 11 undergraduate students and their ideas were also taken. The draft scale was applied to 566 undergraduate students. The scale was applied at a state university in Turkey. %59.7 (338) of the subjects consisted of female students and %40.3 (228) of them was male students. The factor loads of the items in the scale ranged between 0.388-0.677. It is observed that 40.454% of the total variance was accounted for as a result of the factor analysis. The KMO value of the CTB scale was 0.892, Bartlett’s test value3.783E3 (Sd= 378, p=0.000). The sub factors of the scale were; inability to reason, egocentrism, reliance on authority and self-confidence. The eventual scale, after removing the items with relatively low factor loads, consisted of a sum of 26 items; 10 items under the sub factor inability to reason, 6 items under egocentrism, 6 items under reliance on authority and 4 items under self-confidence. Equivalent test and test-retest implementations were performed for the scale. The split-half reliability coefficient was found 0.74. The Cronbach’s alpha reliability coefficient of the scale was 0.87. According to the confirmatory factor analysis made on AMOS, the RMSEA, SRMR, GFI and AGFI values demonstrated that the model had a strong consistency. Departing from these results, it can be claimed that CTB scale meets the criteria of a valid scale. 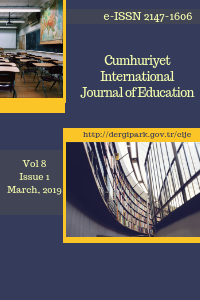